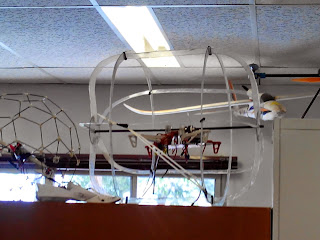 The Ariel University ,located near Shomron, is the youngest university in the state. It was founded 42 years ago, and officially became a university only eight years ago. Like all universities in Israel, it's public.

The university specialized in engineering and recently got a donation of $ 25 million for research in the field of high tech, a very advanced sector in Israel.
The university is working on many projects in robotic engineering. The most important supplies the Israeli army and is still to be finished. This is the most modern of the three and consists on a drone which can also roll and move to the ground. In other words, it is a drone in a pseudo-spherical shaped structure. For the monitoring of the robot indoors , as well as the use of GPS, a system is used that takes account of its distance from the lamps.

After the Department of Engineering is the very important Department of Physics that works with a FEL (free electron laser).The FEL consists of a five-ton particle accelerator about 10 meters long, which carries the particles from 0 volts to 1.5 million volts and then back to 0. Energy is not lost beacuse it is reused by subsequent electrons.

The radiation produced has three uses: cure cancer, reload satellites and control the soil for crops.
The use of radiation in medicine is increasing, in fact radiation causes the death of 98% of the cancer cells.The remaining 2% instead can be easily kept under control by the immune system. The treatment lasts a second and after 4 hours the doctors check that the treatment worked well.

The second needs the use of a laser, which charges satellites. Like this the satellite can remain in orbit until you decide to stop charging it. The use in agriculture consist of a method of control of the land, usually of crops, to see what is happening in the soil.A sample is taken, put in a glass box (material which retains the radiation) and after that the various tests are performed.

I met the vice-chancellor of the University, Igal, who spoke briefly about the courses and the languages of the University. In fact,they are speaking only Hebrew but for each faculty there is an exam in English .Even if it is famous for engineering the University also offers courses in History and Literature.

Although the University is international in teachers and in directors there is the typical Israeli informal and sometimes funny humor. For example, during the conferencwe Igal's cell phone rang so he replied, and he simply exclaimed, "Do not disturb, not now!" And he ended the call rudely and without even seeing who it was.